'My skills are my capital' 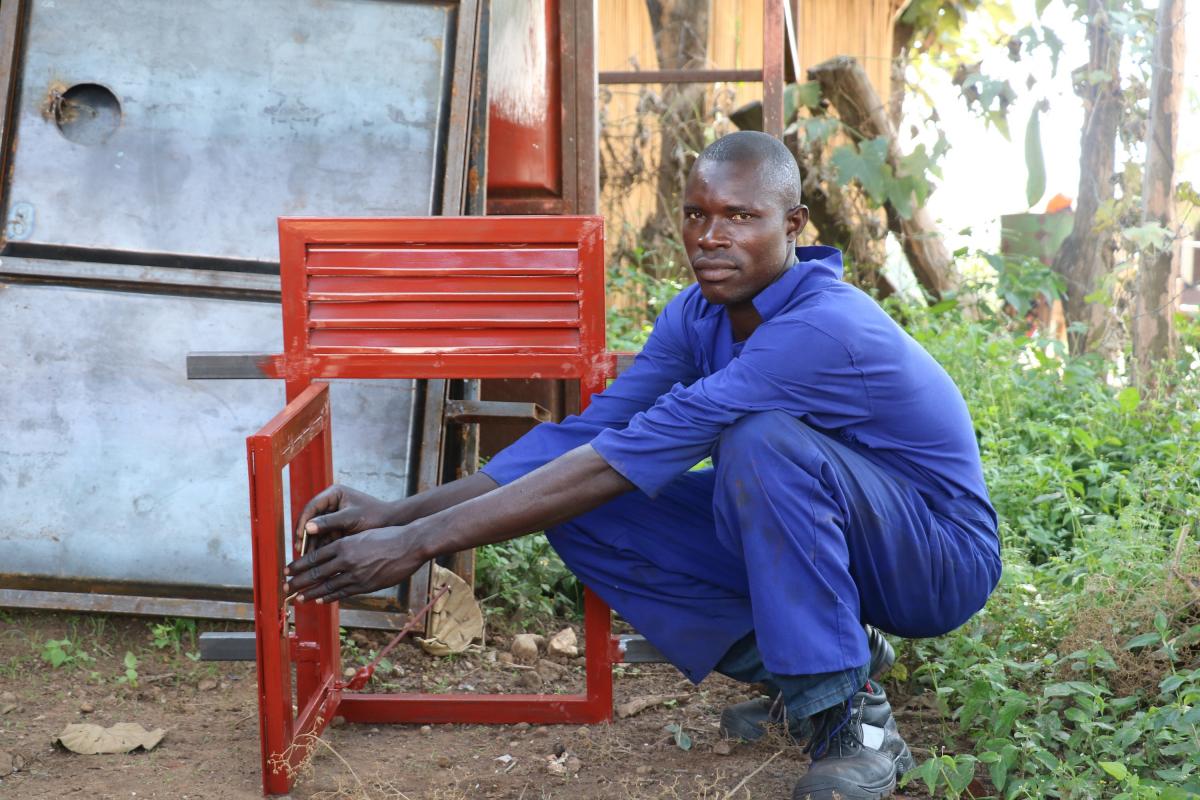 “I don’t have money to use as capital to start a business, but my skills are my capital.” This is 25-year-old Adam Abdu’s statement of faith as he prepares to graduate from Trust Metal Fabrication in Arua town where he has, for the last five months, been an apprentice, learning from a fabrication professional.

Abdu is a Ugandan citizen who lives within Rhino Camp refugee settlement and has, since 2012, been out of school. During that time, he did not just sit at home. As a young man with a widowed mother and three young siblings, he felt he had to find a way of supporting the home.

“I used to move around the village looking for building sites, where I offered my services as a mason or porter,” he says. “I did not know how to build, but I was willing to learn if someone gave me an opportunity.”

Abdu got that opportunity and many more, and never looked back. He kept working on sites, learning and gaining experience. Part of his earnings supported his mother to take care of the home, while he locked up the rest in a bank account, to ensure that he was not tempted to waste them.

Abdu’s willingness to learn as well as desire to make something of himself led him to the Centre for Governance and Economic Development (CEGED), a local NGO that had received a grant from Enabel, the Belgian development agency, to run a skills development course for youth. This was under the Support Programme for Refugees and Host Communities in Northern Uganda, funded by the European Union Emergency Trust Fund for Africa (EUTF).

Rhino Camp refugee settlement is host to about 90,000 refugees from South Sudan. Uganda has become the largest refugee-hosting country in Africa following the escalation of conflict in South Sudan in July 2016. According to the United Nations High Commissioner for Refugees (UNHCR), about 1,037,898 South Sudanese refugees are registered in Uganda, accounting for 74.4% of the 1.4 million refugees Uganda is hosting as of January 2018. These are distributed among several districts in Northern Uganda, one of which is Arua.

The increased number of people in the refugee-hosting areas has placed increased pressure on resources, including schools and employment.   In Northern Uganda, formal employment in the region is often scarce, so Enabel, through the European Union Trust Fund, provides funding and expertise for skills training to enable refugees and Ugandan nationals living within the refugee settlements to get skills that can help them get jobs. This is in a bid to improve not only the refugees’ lives but also those of their hosts, something that will promote peaceful co-existence.

So after the training, Abdu is ready to take on the world. He has skills in making windows, doors, balustrades, curtain rods, beds and many more. Once the training ends, Abdu will sit for examinations managed by the national Directorate of Industrial Training, after which he will get a Worker’s PAS (Practically Acquired Skills), a document that will help him get a job.

Abdu would love to have his own workshop, be his own boss and manage his own income. Much as this is his dream, he knows that it cannot be just now. He understands that setting up a business needs money for paying rent, electricity bills, buying raw materials paying employees.

He firmly believes that he has the most important thing in his hands – skills – and that will enable his dream of becoming his own employer a reality.
“I am going to look for a job and become someone’s employee, but I won’t lose sight of my dream. I will save my money and one day run my own workshop. I want to be the leading professional welder in Arua,” he says.

Abdu believes that the relationships he built in the construction industry will enable him get contracts for doors and windows. And that’s not the only dream that Abdu harbours. Having not had a chance to complete his education, he wishes better for his own children.
“I would like my children to study up to university. I will also ensure that they learn a skill, so that if they do not get a formal job they can use that skill to earn themselves a living,” he says.

Abdu hopes to train further, too. The Worker’s PAS that he will get will not only enable him to work, but to also upgrade his education. He can go on to attain a diploma and even a degree. The sky is certainly the limit for Abdu.