Catering classes light up the future for two orphans 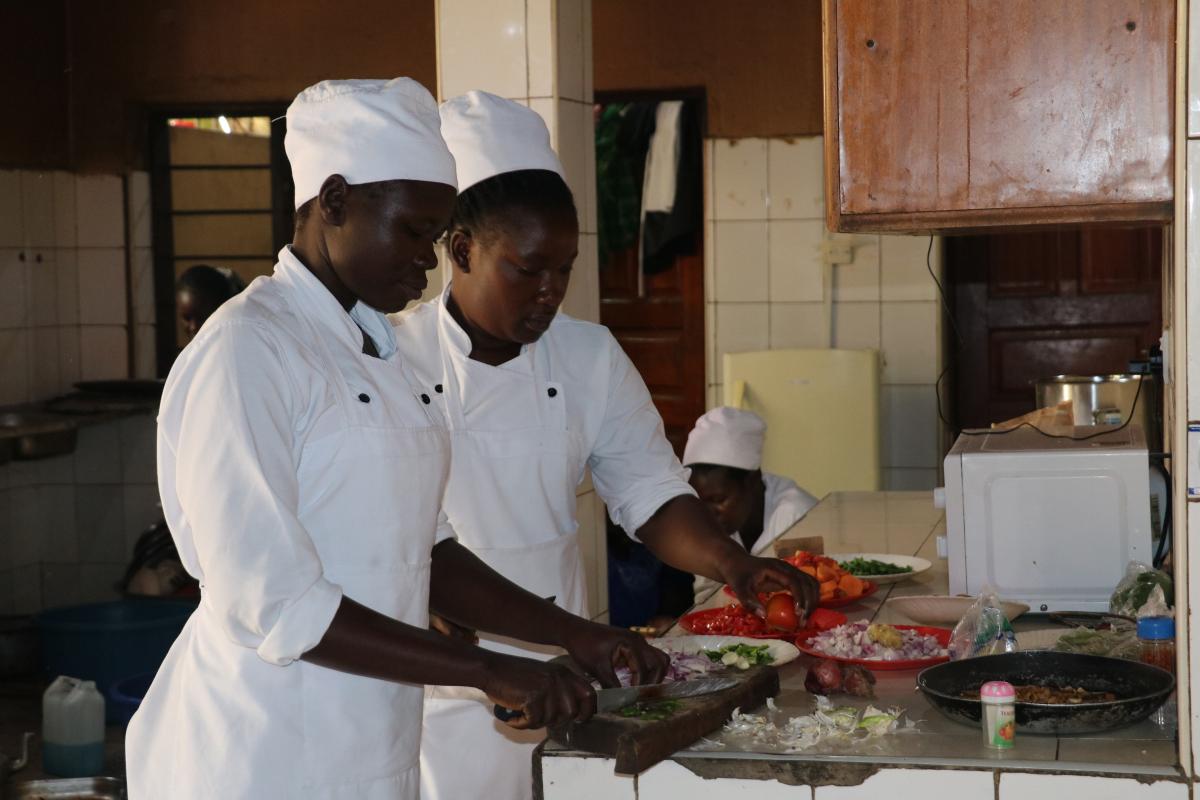 Heritage Hotel in Arua district, West Nile region, is a beehive of activity. There is a meeting going on, and the waiters and waitresses are busy setting up tea for the participants.

Hotels in Arua have been very busy these past couple of years, a situation catalyzed by the high influx of refugees from South Sudan that has seen both international and national humanitarian organisations set up shop in the area or expand operations, with the resultant increased number of staff as well as programme operations.

This hotel is the venue of 27-year-old Farida Zawadi’s apprenticeship. An apprenticeship is a system of training practitioners on a trade or profession with on-the-job training and often some accompanying study (classroom work and reading). Zawadi, a Ugandan national, dropped out of school in Senior Three because her elder brother, who had been paying her school fees since the death of their father, was no longer able to foot them. He had got a family and children of his own to take care of.

Zawadi spent the last five years out of school, during which time she fell pregnant and got a son. The fact that she had got a dependent meant that she had to look for a source of income to take care of herself and her child.

“I have been helping to run my sister’s salon, and in turn I get money to pay my son’s school fees,” she says.

Zawadi got a second chance at education with the EUTF-funded SPRS-NU programme which, working with Enabel, the Belgian development agency, is running a Skills Development and Entrepreneurship Training programme that focuses on equipping youth, including women and girls, with skills that can enable them get employment or start their own jobs. She enrolled through the Centre for Governance and Economic Development (CEGED), a local non-governmental organization, that received funding from Enabel to carry out skills development for youth.

Zawadi’s trainer, Chef Johns Kafeero, who has been in the hotel business for 38 years, thinks apprenticeship is a strategic training mode for unemployed youth. “When a young person is trained from a workplace, they get first-hand experience. Besides learning how to prepare different foods and beverages, both hot and cold, they are exposed to customers and how to serve and meet their needs,” he says.

Indeed Zawadi attests to the fact that she is now an expert at preparing different kinds of meals, including those she had never cooked before at home or even tasted. And it is these skills that she hopes to use to change her life, approaching this with an entrepreneurial outlook.
“I would like to go out and start my own catering business,” she says. “I do not have the capital for this now, so I am first going to get a job, save my earnings and open my own business.”

Like Zawadi, death also robbed 25-year-old Lillian Yesco of her father, leading her to drop out of school in Senior Three. Having spent four years at home without enrolling in school, Yesco was excited to hear about the skills development programme and enroll on it.
“It would give me a chance to not only make something of myself, but to also take care of my siblings,” she says. Yesco’s six siblings are in primary school, a feat they manage by doing odd jobs to raise their own school fees. During the holidays and sometimes in the evenings after school, they dig in neighbours’ gardens at a fee, and also grow cassava, sorghum and simsim on the family land for sale.
“They are too young to take care of themselves, but for now they do not have a choice. When I start working, all that will be no more,” she says hopefully.

So Yesco is now an expert at baking, taking delight in making queen cakes, cookies, chapatti and mandazi. She has also learnt how to prepare dishes such as beef and chicken stew, which are quite popular with customers in the area.

About the programme
Zawadi and Yesco are young Ugandan women benefiting from the Support Programme for Refugee Settlements in Northern Uganda. Funded through the European Union Emergency Trust Fund for Refugees, the programme not only seeks to change the livelihoods of refugees but also those Ugandans/host communities who live within and around the refugee settlements in Northern Uganda and Kiryandongo in adherence to the Refugee and Host Population Empowerment (ReHoPE) strategy.