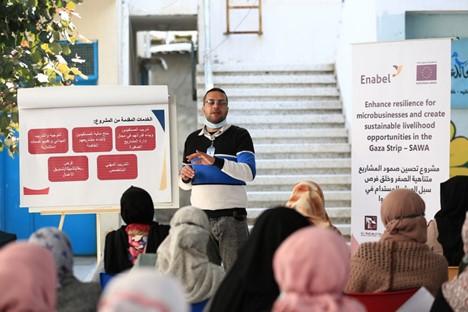 In February, SAWA project and partners (Bayader and Woman's Affairs Centre) have successfully implemented 56 sensitization sessions for women and youth. The first group of sessions were organized in the most vulnerable communities in the Gaza strip. The focus of the session was to encourage the communities to apply for financial and non-financial services in the frame of sustainable livelihood opportunities. More than 1200 women and youth attended the sensitization sessions that were facilitated by SAWA team and implementing partners. SAWA received a total of 24,950 applications.

The second group of the sensitization sessions was a preparatory step before conducting the Go-green Hackathon. SAWA team and the Palestinian Federation of Industries (PFI) conducted 8 sessions with universities and technical colleges. The sessions presented and disseminated the key challenges of the green and circular economy within the industrial sector. During the sessions, 300 youth (120 Male, 180 Female) have gained a better understanding of the green challenges, which will serve as a starting point for solution and idea generation to compete in the hackathon. SAWA received a total of 395 applications with ideas to participate in the hackathon. The Go-Green hackathon will take place at the beginning of April. It will be the first Hackathon in Palestine that deals with green and circular economy challenges within the industrial sector.