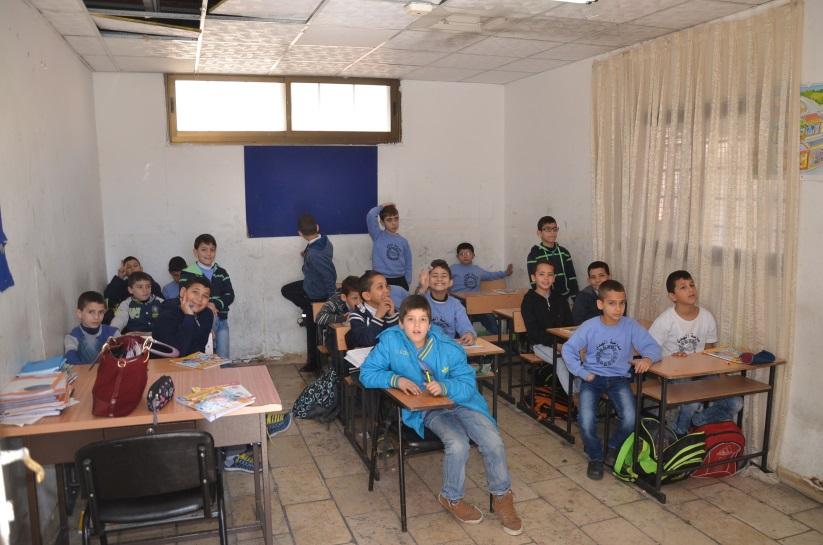 Ahmed lives in East-Jerusalem and together with his friends he goes to school in the Al Huda school in the Old City. He follows classes in one of the two container classes that are added on the roof of the old building. They don’t have a playground so, in between the classes, they play on the street. Also heating or air-conditioning are lacking in the building. During wintertime they follow classes with their jackets on, and when they start being cold, they go outside for a while, to jump up and down. When they are warmed up again, they return to the classroom.

Ahmed is one of 85.000 children going to school in East-Jerusalem, the Palestinian part of the city. Due to the occupation and the unclear statute of Jerusalem, the more or less 200 schools in the East have large educational needs.

In total more than 85.000 Palestinian children follow classes in East-Jerusalem, in about 200 primary and secondary schools. These 200 schools are very fragmented. There are 74 private schools, 60 municipality schools, 46 schools managed by a trust under Jordanian tutelage (according to the ‘Waqf’ system), 7 schools of the United Nations (UNRWA), and 18 ‘Sakhneen’ schools, a type of recognized unofficial schools established as a response to the scarcity of public schools.
The unclear statute of Jerusalem causes huge problems in the educational system in East Jerusalem.

One of the major problems is obtaining building permits. Since the foundation of the Palestinian Authority in 1994, the creation of extra schools in East-Jerusalem has been a top priority, so far without great success.

The number of Palestinian schools in Jerusalem is limited in number, building new schools is almost impossible due to a shortage of building lots destined for public buildings in East-Jerusalem. Also renovations are challenging due to the long and often complicated procedures to obtain building permits. Therefore, classes are generally packed and not adapted to the needs of the pupils, which leads to an environment lacking decent learning conditions. Many schools fall short of electricity standards, decent sanitation, heating in winter or air-conditioning against the summer heat.

The lack of classrooms results in overcrowded classes. In some schools it is not possible for the students to be seated all at the same time. The precarious schooling conditions give rise to an increased school dropout rate, especially in secondary education where more than 5000 students fall outside the schooling system. At present, 36% of the children in East Jerusalem don’t finish school.

In order to solve this problematic situation, the town now rents several buildings. Due to the shaky financial situation of most schools in East-Jerusalem, they are not capable of paying the rental fees themselves. Moreover, the rented apartments – that are redecorated as classrooms – are often not adapted to their new function.

Also the acquisition of new buildings by donors and the international community is planned, but the purchasing process is complicated due to all administrative and legal obligations that have to be dealt with and due to the limited amount of available building lots. Finally, 5 buildings have been purchased over the last couple of years. Further on, the acquisition of 2 extra school buildings by the Islamic Development Bank and Norway is ongoing. Furthermore, different schools are being renovated, among others thanks to the Belgian Development Cooperation. In total, 9 schools, out of which 3 private schools, will be totally renovated in East Jerusalem during 2016. Many others are subject to small improvements, such as  upgrading the electricity and sanitation, thanks to the help of different donors.

What about the teachers?

A second problem is the lack of qualified teachers. Especially for exact sciences, technology and English a shortage exists. There are multiple causes for this lack of teachers. First of all, for the inhabitants of the West Bank it is a challenge to commute to Jerusalem. In order to work in Jerusalem, they are obliged to ask a permit to enter Jerusalem. However, many permits are refused. They are not allowed either to move closer to work, as they are only authorized to travel to Jerusalem for work, but in the evenings they have to return to the West Bank. Staying overnight in Jerusalem is prohibited for them.

Furthermore, life in Jerusalem is a lot more expensive than elsewhere in the West Bank, which decreases the actual value of their salary. This is partly compensated by an extra “Jerusalem-bonus” for teachers working in East-Jerusalem. Unfortunately, this bonus is not high enough to fully compensate the additional costs of the transport, the extra cost of living and the time that is lost while commuting.

A third reason for the shortage of teachers is linked with the recognition of the Al Quds university. The Al Quds university is the most important university for Palestinians in Jerusalem, but its degrees are not recognised by Israel. Therefore, the alumni of, among others, the teacher training have major issues finding a job.

A third major obstacle is the financial pressure from the Israeli Ministry of Education. Currently, most schools in Jerusalem, also those in East-Jerusalem, receive financial support from Israel, as education is, according to international law, a basic right for everybody. However, from the Israeli side there are threats to abolish this support. This would be disastrous for the majority of schools in East-Jerusalem, to the extent that many fear that, in case no solution is found, by the end of 2016, no Palestinian education will be possible anymore in Jerusalem, due to financial reasons. Schools need to receive more financial and judicial support in order to continue their activities.

In the censured version all references to the Palestinian nation are minimized and cities like Akko and Haifa, that were originally Palestinian cities, but currently located in the Israeli territory, are no longer mentioned. This is unacceptable for the Palestinian Authority as they see it as an oppression of the Palestinian identity, and they underline having the right to foster an own national identity.

To address this situation, the Palestinian authorities call upon the schools to look for support in the local community, and to decently inform the parents about the consequences of the different curricula for the education of their kids. In this way, organisations like parent councils can exert pressure too.

For a better future

What is needed to overcome these problems is, first of all, a clear database where all needs and shortcomings of the system are listed, in terms of shortage of teachers, denied permits, shortage of classrooms, subsidies, but also other issues like safety standards.

Secondly, there is a need to concentrate the investments in the education sector for the next couple of years in the most problematic areas, which makes East-Jerusalem, together with the Gaza Strip one of the top priorities.

An additional area of concern is the safety of the students. This includes not only the safety standards at school, like the regulation of the electricity and proper sanitation, but also the security of the children on their way to and back from school. Currently 20% of the students and teachers have difficulties in reaching their schools. In view of the political situation and the many security incidents that have occurred in the old city of Jerusalem, this is definitely an issue to keep in mind.

Furthermore, the fragmentation of the educational system should be diminished. As already mentioned before, there are different types of schools, which is the reason why some of them receive more support than others. For example, private schools in East-Jerusalem are often, wrongly, overlooked.

To overcome these issues and together look for a solution for the future, a working group on East-Jerusalem has been erected, with the Palestinian ministries of education and higher education, of Jerusalem, of foreign affairs and all interested international donors.

If all stakeholders work together and gather their forces, there is a chance that Ahmed and his classmates will be able, in a couple of years, to safely return to a renewed school with a customized curriculum taught by enthusiastic teachers.

[1] Victims of Our Own Narratives?, Portrayal of the “Other” in Israeli and Palestinian School Books, 2013, Council of Religious Institutions of the Holy Land, http://israelipalestinianschoolbooks.blogspot.co.il/.
Eva MORRE - 08-08-2016 15:20