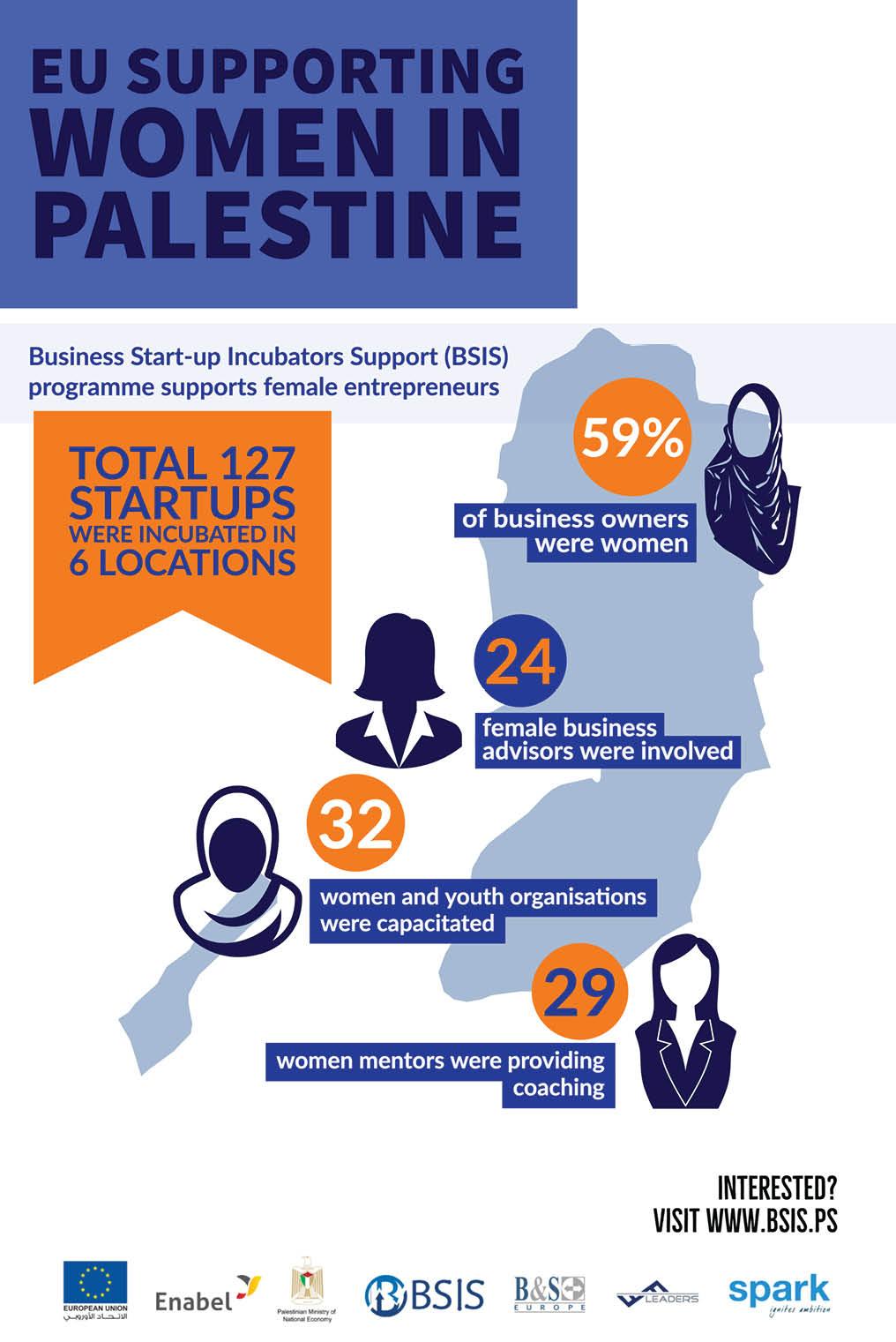 In 2004, entrepreneurship and start-up support programs in Palestine began by targeting the students at universities, particularly those in the IT sector. The first programs focused on promoting the idea of entrepreneurship and encouraging Palestinians to take this path. IT centers of excellence began to incubate start-ups through provision of space and guidance.

Later on, while the start-up ecosystem developed, the incubators started to provide the entire cycle of incubation, including systematic advisory services and coaching, as well as business advice. Moreover, the business incubators began to be more open and encouraging to other business sectors outside the arena of IT. This probably plays a role in the decisions of many women to translate their ideas into businesses and join the incubators.

Albeit men are still way more likely than women to become entrepreneurs, the number of female entrepreneurs is growing, particularly in Palestine. According to a World Bank study*1 published last year, 23 percent of start-ups in Gaza and the West Bank have female founders, while in similar ecosystems the numbers are lower – in Beirut, for instance, 19 percent of the start-up entrepreneurs are women and in Dar es Salaam, 15 percent. *2 Let’s ask Palestinian women why they chose the path of starting their own business.

While working for several years in the field of women’s empowerment in the MENA region, Palestinian Dr. Manal Dandis from Hebron heard countless stories of women who were under stress. The working environment slowly began to have a negative effect on Dr. Dandis as well. She recalls how she found laughter yoga: “I was searching online for a method to reduce stress, and laughter yoga attracted my attention. I read about the benefits: the yoga breathing sequence combined with laughter brings oxygen to one’s body and releases stress. According to the studies, fake laughter provides the same physiological and psychological benefits as spontaneous laughter. I started to practice it and felt the benefits immediately.” When Dr. Dandis wanted to share her experience with others suffering from stress, she found out that there were no laughter yoga teachers in Palestine. So she decided to become one herself and packed her luggage in order to travel to India to study with Dr. Madan Kataria, the originator of the concept.

Dr. Dandis is now a certified laughter-yoga teacher and the official laughter-yoga ambassador to the Middle East. She gives classes in gyms, sport clubs, study centers, chambers of commerce, and children’s centers. While targeting mainly the most vulnerable people, such as disabled children and families living in poverty, she also teaches in work teams and school classes. She has so much work that she is able to employ yoga teachers and grow her business. For this she is receiving support from the EU funded Business Start-up Incubator Support (BSIS) project, implemented by Enabel (the Belgian development agency) at the Business Incubator Unit of the Palestine Polytechnic University in Hebron.

Dr. Dandis’ business idea follows the mission of the laughter-yoga concept: health, happiness, and world peace. She believes in these values, and she is convinced that given the great market potential, her business will continue to grow. “I have already overcome many obstacles. By showing the scientific research that has been carried out on laughter yoga, I have convinced people that it is neither a religious nor a political endeavor. It is a method to release stress, and this is what we need. My dream is that all Palestinians would practice laughter yoga,” she concludes while laughing.

A passion for fashion resulted in a career change

Fashion designer Manar El-Banna presents sketches and photos of dresses that are ready for purchase in her showroom in Gaza City. It’s difficult to believe that she only started her career as a fashion designer about five years ago. “I studied architecture, which obviously requires some similar skills, but fashion was only a hobby for me before. I sewed baby clothes for 12 years until I started to think that it could be my main job,” she reveals.

“I receive professional support on how to teach laughter yoga from my mentor, Dr. Kataria, and the BSIS program facilitates the technical aspects of the management of my business. Moreover, I enjoy the positive energy around me in the office where I meet other start-up entrepreneurs, create new ideas, and seek for synergies.”
Dr. Manal Dandis

El-Banna changed her career and followed her passion by establishing Mix Fashion in 2013. Since then, she and her growing number of staff members have been designing and sewing multi-usage dresses, some of which are made from recycled materials. Due to the restrictions imposed on imported goods, textiles are costly in Gaza. Therefore, many women prefer to own multi-usage clothes or recycle their old clothes.

“I started with abayas and continued making wedding dresses and other costumes with the idea that the customer could wear the same attire on several occasions. Regardless of the purpose, all my clothes are tailor-made,” the designer explains. While pleasing customers is an obvious goal of every business owner, under the difficult situation that Gaza is facing, the social impact of entrepreneurship is equally important for El-Banna. Her business contributes to improving the lives of several Gazan families since Mixed Fashion employs five full-time employees along with several part-time workers. Employing women requires taking cultural aspects in to consideration. She explains: “Some of my part-time employees work from home, which allows these women to continue to take care of their families while they earn some extra income at the same time.”

El-Banna’s passion and vision led her to choose a career in fashion design, but in order to make her business successful she needed professional business advice. “The biggest advantage of joining the Business and Tech Incubator at the Islamic University of Gaza is that it enabled me to move from my old office to the showroom here in the center of Gaza City. The seed fund I received made this possible,” notes El-Banna.

The designer says that they call the BSIS program bassees, which means “hope” in Arabic. “Hope is what the project and entrepreneurship have given me,” El-Banna concludes.

Jerusalemite Suzan Ghosheh Shurafa has done something unusual with her life. She used to hold a good position in an international organization, but she felt that her creativity and energy were restricted. She explains the reasons behind her decision: “As a psychotherapist, I needed to be in the field, not in the office waiting for a fund or a new project. I was sitting in meetings, writing papers, and doing deskwork while I saw that there was a lot of work to do in the field.”

Ghosheh Shurafa opened up to her friend Asmahan Alayan who is an experienced businesswoman who was dealing with start-ups. Encouraged by these discussions, Ghosheh Shurafa became convinced that she should start a business on her own. She partnered with Suad Mitwalli whom she met in a psychodrama high-diploma course. Previously both of them had completed a BA in psychology from Birzeit University. In addition, Mitwalli holds a diploma in Eye Movement Desensitization and Reprocessing Therapy. These two women, who have a lot of experience in counseling and trauma therapy, especially with women, decided to establish Nisma Al-Quds, which means “fresh air Jerusalem.”

“My own business is my dream come true! I don’t want to sit at home; I want to do something I love.”
Suzan Ghosheh Shurafa

“We started to use nature as a therapeutic technique by organizing walks and talks in nature and breathing activities for women in the villages and raising awareness about mental health. We have traditionally labeled mental health as a concern only for those persons who have been marginalized because of their psychopathology. I have a passion to change this,” Ghosheh Shurafa states.

She emphasizes that mental health issues do not occur only in the refugee camps or within other vulnerable groups but also among women who work and live regular lives in the cities. Since Nisma Al-Quds joined the Jerusalem business incubator, partnering with Palestine Education for Employment and operating on the premises of Al-Quds University, they started to strengthen their marketing and awareness-raising activities. In addition to traditional psychotherapy, they continue to introduce new therapy methods, such as group therapy and psychodrama.

Anu Virtanen is a Finnish communications consultant who works for several EU entities globally, including the EU-funded Business Start-up Incubators Support (BSIS) program, which supports entrepreneurs in Palestine through partnering with business incubators located in East Jerusalem, Ramallah, Hebron, Bethlehem, and Gaza. The program encourages entrepreneurs to change their ideas into businesses and, consequently, contributes to private-sector development and the improvement of lives in Palestine. The program is implemented by Enabel (the Belgian development agency).