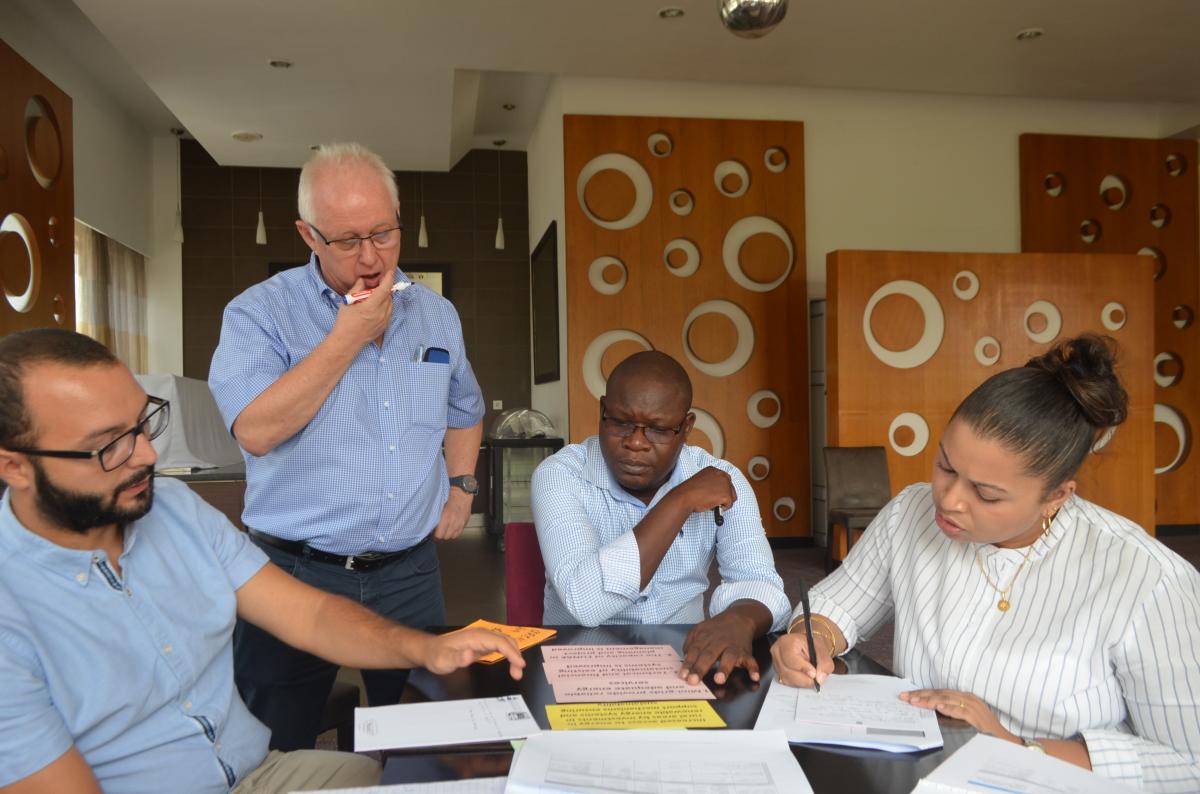 In the first week of March, Management for Development (MDF) consultant Ingrid Plag paid a visit to Enabel projects in Mozambique to provide hands-on support to the baseline studies. For the Capacity Building project at the Ministry of Mineral Resources and Energy (CB MIREME) this exercise formed the capstone of previous baseline meetings in Brussels and Bilene. The RERD2 project team, on the other hand, has only been fully operational since mid-October 2018 and therefore welcomed this opportunity to bring together staff members from both Enabel and the partner institution FUNAE, the National Energy Fund, to analyse, review and update the project’s objectives, results, risks and gaps.

In 2009, the first phase of the “Renewable Energy for Rural Development” project was formulated and two years later its implementation took off. The RERD1 project recognized that the access to energy is a catalyst for development and that by supporting rural electrification it would contribute to rural development. With a budget of 23 million euros the first phase of the project focused on the construction of photovoltaic systems in schools, health centres and administrative buildings as well as water pumping systems and the development of micro-hydro with isolated mini-grids. The RERD1 project was operational across the country (with installations in Manica, Sofala, Cabo Delgado, Inhambane, Niassa and Zambezia), where a variety of renewable energy resources is widely available. However, the high geographical dispersion of selected sites brought the need to also widely spread resources across great distances. This limited the project’s efficiency and capacity to generate visible impact. It was therefore decided that the project’s second phase was to focus on maximum two provinces. Eventually, the RERD2 steering committee decided to concentrate on one province: Zambezia. Apart from the lesson learned above the formulation of the second phase also benefited from other lessons learned: the current project, for example, undertakes comprehensive feasibility studies and focuses more on the development of Public Private Partnerships (PPPs) and productive use of energy in order to increase sustainability of systems.

The second phase of the RERD project, with a total budget of 14 million euros, is not a mere continuation of the previous phase. It is completely aligned with the current policies of the Mozambican government and is a reflection of the country’s priorities. Electrification is currently at the top of the Mozambican agenda, with the commitment of establishing universal access to electricity by 2030. At the moment, less than 30% of the population has access to electricity. This percentage drops to 15% in the rural areas. The past two years the Mozambican government took some steps in the direction of the 2030 commitment. A new Energy Regulatory Authority (ARENE) came in function, which is responsible for the supervision and regulation of production, transport, distribution, commercialization and storage of electricity. A range of new energy policies were developed such as the National Electrification Strategy (ENE) and the Integrated Master Plan for electricity infrastructure. These plans foresee an increase of the country’s capacity to generate electricity and to secure access to electricity for the entire population by 2030. Furthermore, the Electricity Law of 1997, currently under advanced revision, aims to promote energy efficiency, participation of the private sector, and  renewable and off-grid energy production and supply. Indeed, establishing connections through the national grid is only a part of the solution as it is projected to only reach half of the population by 2030. The government will also need to focus on investments in off-grid systems, of which the construction and subsequent transfer to EDM (Government Electricity Company) for operations are among the responsibilities of the RERD2 main partner institution, the National Energy Fund (FUNAE).

The visit of MDF consultant Ingrid Plag was a perfect opportunity to bring together the personnel from both Enabel and FUNAE working on the RERD2 project. Ingrid started the workshop by explaining the importance of monitoring and the different elements of the Enabel monitoring and reporting framework, known as “MoRe”. She also explained the logical framework, the terminology and the risk matrix. Each theoretical section was coupled with a practical exercise linked to the RERD2 project. In short, the team received several assignments which allowed to thoroughly analyse the project document and go over each outcome, output, indicator and risk and check whether there were gaps, overlaps and outdated or missing information.
The expected impact remains the same as in the first phase project, i.e. “Contribute to rural economic and social development by increased sustainable access to energy”. For the outcome, the participants decided to specify the province of intervention: “Increase access to energy in the rural areas of Zambezia Province by investments in renewable energy systems and support mechanisms ensuring sustainability”. Especially on output level there were some interesting discussions. It was decided to more or less keep the three outputs: “1. Mini-grids provide reliable and adequate energy services”, “2. Technical and financial sustainability of the systems is improved”, “3. The capacity of FUNAE in planning and project management is improved”. However, participants pointed out that without a solid, favourable legal framework the project would have difficulties attaining its objectives and guaranteeing sustainable impact, especially with regards to PPP and private sector involvement. Therefore, a fourth results area was deemed necessary: “4. New legal framework is influenced by FUNAE”. This new output and the RERD2 project in general is definitely linked and complementary to the work of Enabel’s capacity building project CB MIREME, which aims to improve the performance of the energy ministry MIREME, its provincial directorates and the new energy regulator ARENE.

The workshop left the participants with a positive feeling and attitude. It allowed everybody to understand the importance of a solid monitoring and risk matrix, to familiarise themselves better with the project document, as well as to develop a better understanding of each other’s roles. Last but not least, the project team took its first steps into drawing up the baseline study report for the second phase of the Renewable Energy for Rural Development project.