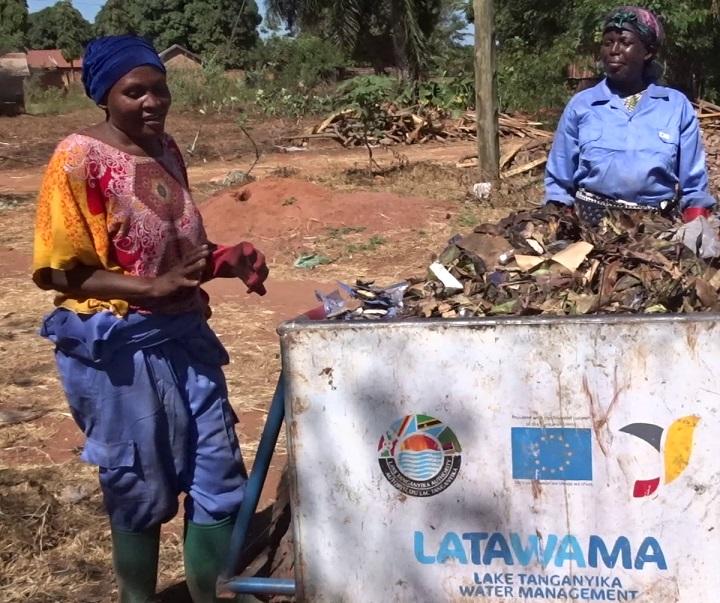 In the city of Kigoma, Tanzania, the LATAWAMA project has been active since January 2020. Many activities have been carried out. As the project was not a “ready-made project,” the activities have been defined and the main actors identified with the full participation of various stakeholders. Community-based organisations are one of the backbones of solid waste management operations. Besides, other actions in waste management have also been undertaken. Beneficiaries talked to the technical team. The feedback is heartening.

Community-based organizations are composed of women heads of households and young people from disadvantaged backgrounds, with a maximum of 10 people per organisation. They are responsible for the pre-collection of solid waste from different places (households, markets, institutions, etc.) to the collection points (tippers managed by the Municipality).
They are keys players of a project guided by four principles: increasing service coverage, strengthening management capacity, introducing the principles of the circular economy (using yesterday’s waste as a resource for tomorrow), organising awareness and education campaigns.

The members of the community-based organizations directly supported by the LATAWAMA project said that the material given was of paramount importance. Bahati Rhamadhani is a mother of about 40 years, living in the locality of Katubuka. With her friends, while collecting the waste, she said that the equipment that the LATAWAMA project gave them makes it possible to collect the waste. “With this work, we get money, and it helps us meet some of our needs. We, therefore, thank the LATAWAMA project which gave us material”. The remaining challenge is that the population still mixing household waste with other things like stones, bricks, and even needles.“ We try to sensitize them for a behavior change”, she said.

Other actions initiated by the project…

In addition to actions carried out through community-based organisations, further activities such as the support of the Maweni Hospital for solid waste management have also been initiated. Rashidi Masoudi, a health officer, said the situation had improved significantly in solid waste management at this hospital: “Before, the work was much more difficult. The waste was burnt in a place that was not adequate. With the repair of the incinerator, the work became easier. We have been trained in biomedical waste management. This is the 5th year that I work at Maweni Hospital. Things are going very well now; all the waste produced here is burned completely”.

For Rajabu Hassan, Biomedical Engineer, the hospital used to have a poor-quality incinerator, which could not burn waste according to acceptable environmental standards. “The LATAWAMA project repaired the incinerator that allows us to burn waste quickly. The ashes generated are also put in the new pit that meets the standards of the World Health Organization and the ministry of public health. We are all aware that biomedical waste is dangerous, and we are grateful to the LATAWAMA Project.”
Nevertheless, he would like to further collaborate with the project, which will fund the construction of the disposal hall of sorted waste awaiting incineration.

Funded by the European Union, the LATAWAMA project is being implemented by Enabel in collaboration with the Tanganyika Lake Authority.